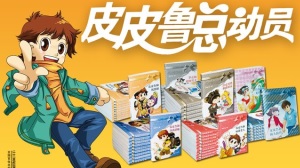 LVC and Beijing Pipilu Culture and Technology Co., Ltd. has reached an investment agreement, LVC will be an important strategic shareholder of Pipilu, both of which work together to build the world's top children and adolescent literature IP companies.

Mr. Zheng Yuanjie, considered as the father of Pipilu, is a famous writer of children's literature in China, his work fairy king has been published consecutively for thirty years and has become a literary classic series. In 2011, among the ten books evaluated by the United Nations, "Pipilu‘s General Mobilization" and "Harry Potter" have both ranked the fourth. Mr Zheng Yuanjie is also an active philanthropist promoting the cause of social welfare, once won the award of "China Charity Model Award" which was presented by former president Hu Jintao and "the angel of love" from China foundation for poverty alleviation.

LVC considers the culture for young people and education market as the direction for future development. Prior to investment on Pipilu, LVC has invested in Bilibili and other outstanding young cultural enterprises. LVC cultural industry investment director Gu Zhe said, LVC founder and the whole team are loyal fans of Pippi series works and pay full respect to Mr. Zheng Yuanjie. LVC is regarded as the company concentrating on long-term value investment and in-depth post-investment management of professional equity and Mr. Zheng Yazi is a respected young entrepreneur. LVC is honored to be Pipi Lu’s  strategic shareholders. Under mutual corporation, both teams will get together to create a long-term goal of excellence in social values, demonstrate the authority of Chinese cartoon literature and promote the value of integrity, courage, strength.